Aretha Franklin, The Queen Of Soul Comes To Porvoo 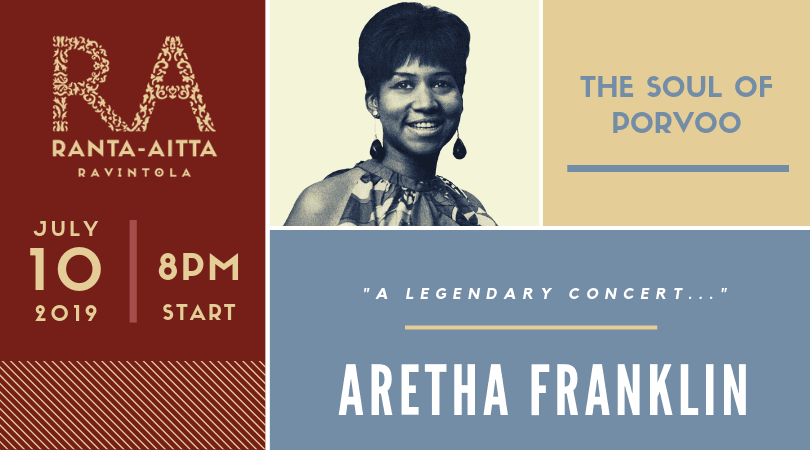 Aretha Franklin, The Queen Of Soul

Aretha Franklin needs no introductions. She is the Queen of Soul, the most charted female artist ever, and named by the Rolling Stone magazine as “the greatest singer of all time”. Aretha Franklin embodies the legacy and heritage of soul music.

Aretha Louise Franklin was born in Memphis in 1942, but she grew up in Detroit, the ‘Motor City’. As a daughter of a Baptist minister, she started her career singing gospel. After some discussions with her father she switched to secular music and made her first recordings for Columbia Records at the tender age of 18. In her late 20’s she had already earned the title “Queen of Soul”.

Aretha Franklin is best known for her fast paced R&B hits such as “Respect” and “Think” as well as bluesy power ballads “(You Make Me Feel Like) A Natural Woman” and  “I Never Loved A Man (The Way I Love You)”. A little less known is her prowess as a classical singer. She manifested this ability brilliantly in the Grammy Awards of 1998 when she stepped in for the ailing Luciano Pavarotti, at 22 minutes’ notice, and sang the opera aria “Nessun Dorma”. Watch her performance on Vimeo or YouTube. The greatest singer of all time, indeed.

In 1968 Aretha Franklin was at the hight of her career with several top 10 hits. Her first ever European tour brought her to Amsterdam where she was enthusiastically welcomed at the Concert Building (Concertgebouw). Luckily for us the cameras were there too to record her perfect voice and the wildness of her Dutch fans. This recording is a rare gem because only a handful of her concerts were ever filmed. Also she contracted a crippling fear of flying in the early 1980’s and never performed in Europe again.

Aretha Franklin died August 16th 2018 in her own home after a long illness. The world lost a superb singer, songwriter and pianist as well as an outspoken civil rights activist. But her music and influence lives forever.