James Brown, the Godfather of Soul, comes to Porvoo 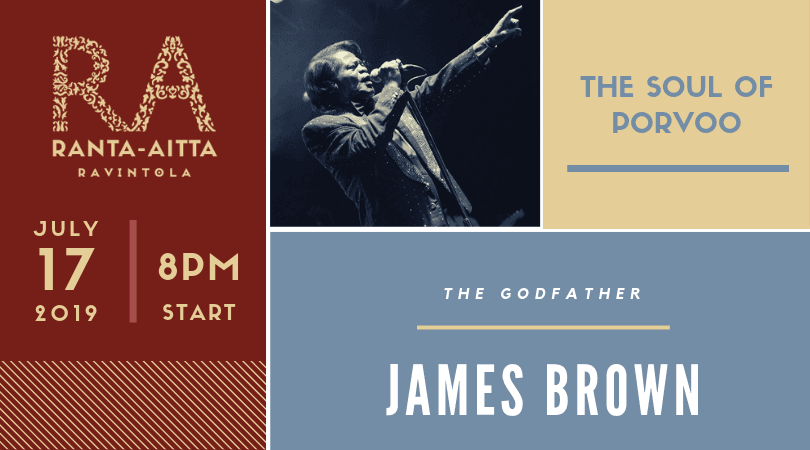 The Hardest Working Man In Show Business, Mr. Dynamite, Minister Of Super Heavy Funk, Soul Brother No. 1… James Brown has probably more honorific nicknames than anyone in music. Singer, songwriter, musician, record producer, bandleader, dancer… He has all the roles too. His career lasted for 50 years and he has influenced many musical genres. Most notably funk, hiphop and rap music.

James Joseph Brown Jr. was born in South Carolina in 1933. His family was poor and James had to fend for himself from a very young age. He hustled to get by, learned boxing and several musical instruments. Young James performed to the World War II troupes on the streets of Augusta, Georgia. At the age of 16 he was sent to a juvenile detention center for robbery. There he started a gospel group with his cell mates. If for Aretha Franklin singing gospel was the start of her career, for James Brown singing gospel meant the end of a very different career. He promised the judge to “sing for the Lord” and gained an early release.

His gospel career with the band Famous Flames got a flying start in 1955 with the help of rock n’ roll legend Little Richard. He convinced his own manager to take the band under his wings. They recorded their first hit ‘Pleas Please Please’  in 1956. With the new management and excessive touring, their style evolved more towards rhythm and blues. Through the 1960’s the band (that was now called James Brown and the Famous Flames or The James Brown Band) got known for their exploding live performances, upstaging closing acts like The Rolling Stones.

The 1970’s James Brown Revue was extravagant. 40-50 people, including a Master of Ceremonies, horn section and a string quartet, toured the United States with 330 shows per year. The band wore tuxedoes and patent leather shoes and performed choreographed dance routines. James Brown had a reputation as a strict bandleader. He had the pick of the best musicians and he expected only the best. Saxophonist Maceo Parker remembers in a Fresh Air interview in 2007   : “ You gotta be on time. You gotta have your uniform. Your stuff’s got to be intact. You gotta have the bow tie. You got to have it. You can’t come up without the bow tie.”

Shows were long and sweaty. One of James Browns best known stunts was the ‘cape routine’. It involved Brown collapsing to his knees in apparent exhaustion. His MC would rush to the stage and drape a cape on Brown’s shoulders and start to walk him towards backstage. Brown would then appear to pick himself up, shake the cape off his shoulders and return to the microphone and keep on singing. The crowds loved him and ladies screamed.

By the late 60’s, and after many top ten hits, James Brown’s style of music became defined as funk. His staccato vocals, not quite sung but not quite spoken either, ‘Funky Drummer’ syncopated drums, strutting bass lines and guitars used as percussions defined the new style. Funk music had a big influence on James Brown’s contemporaries: Sly And The Family Stone, Funkadelic, The Temptations and Michael Jackson to name just a few. Brown’s beats and shouts became the favourites of the 1970’s disco and the emerging hip hop musicians. Countless of songs have featured Brown’s ’Ain’t It Funky Now’ and ‘Good God!’ shouts and breakbeats. Rolling Stone magazine has listed just some of the hits featuring ‘Funky Drummer’. James Brown remains, to this day, the world’s most sampled recording artist.

When his record sales had dropped in the early 80’s, James Brown turned to acting. He appeared in movies like The Blues Brother (playing a very inspiring preacher), Rocky IV (scoring a hit and a Grammy Award with ‘Living In America’) and the TV show Miami Vice. He teamed up with rapper Africa Bambaata to record the hit single ‘Unity’ and was back topping the charts with the album ‘I’m Real’. The hardest working man in show business had re-invented himself again.

Because of his own deprived childhood James Brown was an avid campaigner for education. He donated royalties from his song ‘Don’t Be A Drop-Out’ to stay-in-school programs. He held many public talks to advocate education. Children in need were close to his heart and just a week before his death he gave out toys and turkeys to kids in an Atlanta orphanage.  James Brown kept touring and performing on TV and films right up to his death. He was booked to perform with B.B. King and record a duet with Annie Lennox when a pneumonia caught up with him on Christmas Day 2006. He was 73 years old.  His career had lasted for 50 years and he had performed on seven decades from the streets of Augusta in 1940’s to Live 8 in 2000’s.

Feed your soul with music, food and drinks. Free entry.