Smokey Robinson, The King Of Motown, Comes To Porvoo 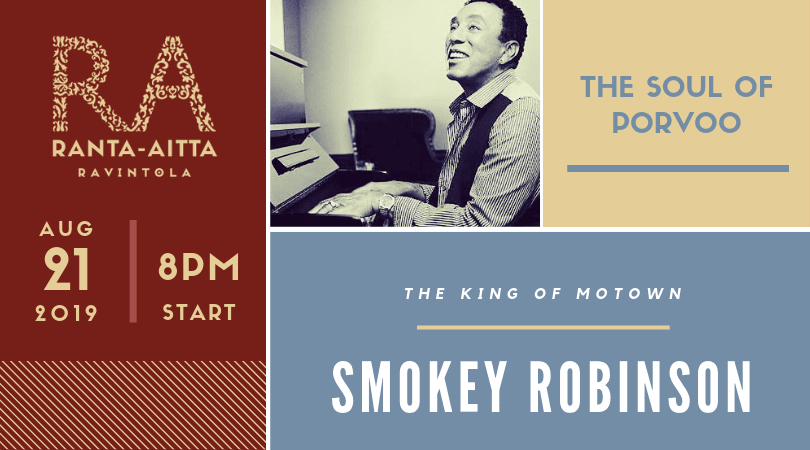 Smokey Robinson’s story goes hand in hand with the tale of soul music’s most influential record company: Motown. Both were born and bred in Detroit, the ‘Motor City’. Robinson was the company’s main songwriter and producer, and a star, from its beginning in 1959. When Motown was sold to MCA in 1990, Smokey Robinson retired as the Vice President.

There were many times in Smokey’s career when his singing had to take a back seat to his role as a record company executive. But Smokey has never retired from music. Even though he soon turns 80, he can be seen and heard in a new documentary film ‘Hitsville: The Making Of Motown’ (to be released in Autumn 2019) and on the latest records of young and upcoming soul artists.

Smokey And The Miracles

William Robinson Jr. was born in Detroit in 1940. You would think that the nickname ’Smokey’ came from his smooth voice or his exotic looks, but no. Little three year old William was a huge fan of Western movies, so his uncle gave him a cowboy name: Smokey Joe. And that’s how he introduced himself to new people.

Living in the same neighbourhood as the Franklin family, Smokey knew Aretha from the age of eight. Young Smokey did well at school, but there was all that inspirational music around: in church, on the radio and in the gatherings of friends and family.  Music became his true passion. In High School he formed a doo-wop group ‘The Five Chimes’ together with his class mates and childhood friends. After a few name and line up changes, this group became the famed ’Miracles’.

The seeds of a long and fruitful partnership were sewn in 1957 when the band met songwriter Berry Gordy. After a failed audition for Brunswick Records, Gordy wanted to help the young talented group and asked to see their material. To Gordy’s amazement the teenaged Robinson showed him a notebook with 100 songs to choose from. Gordy helped them write and record their first single ‘Got a Job’. Smokey Robinson dropped his electrical engineering studies and stuck with his new friend Berry Gordy for the next decades.

The Start Of Motown

When paid only $3.19 for his production work with the Miracles, Berry Gordy set up his own record label Tamla Records in 1959. It was to become Motown Record Corporation the next year and The Miracles were amongst the first artists he signed. With the combined music writing prowess of Berry and Smokey, Motown got to a flying start. The Miracles were the company’s brightest stars with smash hits like ’The Tracks Of My Tears’ and ‘I Second That Emotion’. The group was so prolific that they co-wrote hits for the Temptations, Marvin Gaye, the Marvelettes and many more on the Motown catalogue.

The Miracles became the prototype for later Motown groups. They were the first to hire a choreographer to polish their dance moves. These stage performances became so popular the group got nicknamed ‘The Showstoppers’. Motown could package their less known artists together with the Miracles on ‘Motown revue’ tours. This way they got to introduce Stevie Wonder, The Supremes and The Four Tops to an appreciative audience and let them hone their skills as performers.

Smokey had married his fellow Miracles’ singer Claudette Rogers and the constant touring was taking its toll on their family life. Claudette was the first to retire from the group in the mid 1960’s. She continued to sing on records and TV shows but left the heavy touring to others. By the end of the 60’s Smokey was also ready to leave the group and spend more time with his wife and two kids. But when the single ’The Tears of a Clown’ became No. 1 hit in US and UK, he postponed his departure and continued touring.

In 1972 it was finally time for Smokey to leave the group and concentrate on his job at Motown and family life. His replacement, Billy Griffin, was introduced on national television. The Miracles went on touring and recording without Smokey and Claudette. Even though they never matched the glory days the 60’s and 70’s, the group kept going. They were finally inducted to Rock and Roll Hall of Fame in 2012. The key members of the group have sadly now passed away, but the Miracles still performs with lead singer Sydney Justin.

Artist Or Business Man? Both!

Smokey himself managed to stay off stage for only a year. His first solo album was released in 1973. The start of his solo career was as much of a struggle for him as it was for his former band. Ironically Smokey found himself in competition with his own protégés: Marvin Gaye, Stevie Wonder and former Temptations member Eddie Kendricks. When Smokey spend his working time promoting their albums and tours, nobody was promoting Smokey.

Through the 70’s he kept juggling two careers. He released several hastily put together albums to bad reviews. Until in 1979 when former Miracles guitarist Marv Tarplin came to his aid with a tune he had composed. When Smokey finalised the lyrics to this song, it became his biggest solo hit ‘Cruisin’’. In the 1980’s Robinson embraced the new media of music videos and earned a Grammy Award for his soft pop song ‘Just To See Her’.

After he retired from Motown in 1990, Smokey has had time for numerous careers. He has his own winery and skin care line. He has recorded duets, gospel and children’s music. In 2019 Smokey Robinson is touring Canada and the US.

Sadly we can’t bring this legend to perform live at Ranta-Aitta. But come and enjoy the next best thing: his concert from Las Vegas in 1998 on screen. He’ll be singing all the hits!