Earth Wind And Fire Are Coming To Porvoo 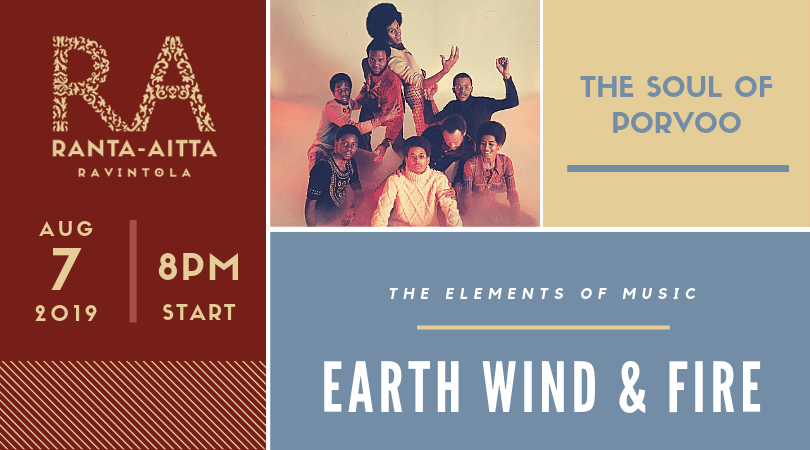 What do you get when you mix together funk, soul, R&B, jazz, rock and afro pop with massive stage shows and The Phenix Horns? You get the base elements of perfect party music, of course.

Earth, Wind & Fire was the brain child of one ‘musical renaissance man’: Maurice White. More than a band, EWF is a musical collective. Over 50 musicians have played in the group through the decades. Even though the founding member passed away in 2016, members of the collective are still active. You can’t stop good music.

In the late 1960’s Maurice White worked as a session drummer for Chess Records. He wrote wrote music and commercial jingles in Chicago and dreamed of something else. California was the land of plenty, and Maurice asked his half brother Verdine White to move with him to Los Angeles. Through auditions the first ten-man lineup of Earth, Wind & Fire was born. The group got their name from astrological elements and later used Egyptian and biblical symbols in album cover art and stage productions. Self-titled debut album was released in February 1971. It got good reviews from music magazines, although the band’s mash up of musical cross-references proved hard to swallow for some critics. Sadly, you can’t eat good reviews, and the band kept struggling.

Director Melvin Van Peebles was working on his independent film ‘Sweet Sweetback’s Baadasssss Song’. The movie had a DIY budget and he needed someone to play the film score, someone cheap. Luckily Van Peebles’ assistant was dating Maurice White and EWF got the job. An unconfirmed story states that Van Peebles gave the band a check that later bounced; Earth, Wind & Fire never got paid for their work. Soundtrack album was released in early 1971, before the film itself, as a marketing trick. ‘Sweetback’ went from low-to-no-budget struggle to a hit film and started the genre of blaxploitation movies.

The band finally auditioned successfully to top managers. As a result, they got a deal from Columbia records and went on tour with the pop/folk singer John Sebastian from The Lovin’ Spoonful. Wider audiences started to generate commercial success and EWF albums climbed up the charts.

In 1975 Earth, Wind & Fire got to score another film: ‘That’s the Way of the World’, starring Harvey Keitel. The band wanted to repeat ’Sweet Sweetback’s’ formula and release the soundtrack album before the movie was out. This proved to be a good decision. Even though the film was a box office bomb, the music was a big hit. The LP and the hit single ’Shining Star’ reached the top of the Billboard Hot 100. EWF was the first black act to reach number one position on both the album and the singles lists. ’Shining Star’ also won a Grammy Award.

With money rolling in from the triple platinum album, the band was able to hire a full horn section. They were named The Phenix Horns. Also the live shows reached a new hight of extravaganza: big band, pyrotechnics, choreographies, lasers and flying pyramids, even magic! Famous stage magician Doug Henning joined the tour with his young assistant David Copperfield. Together they made the band disappear and performed other tricks.

Maurice White started his own production company Kalimba Productions and singed many former colleagues and new groups as clients. These bands often went on tour with EWF and thus generated revenue for both. Kalimba Productions loaned The Phenix Horns to other artists. The Horns got a following of their own and went to work with several top musicians, most famously with Phil Collins and The Genesis.

Our featured live show: ‘Earth Wind & Fire – In Concert’ was filmed at Oakland Coliseum Arena on New Year’s eve in 1981. They were at the hight of their powers with classic dance hits like ‘Let’s Groove’. EWF had just released their 11th album titled ‘Rise!’ and embraced a more electronic approach to music, completely in touch with the times. Maurice White and other band members worked actively through the 80’s, together and in solo projects, producing and writing music for themselves and other artists: Barbara Streisand, The Temptations, Phil Collins etc. In the 90’s EWF performed with Wu Tang Clan and later collaborated with Wyclef Jean.

Earth, Wind & Fire has never been out of style. Where there’s a party, there’s gonna be EWF songs. Even though Maurice White sadly died from Parkinson’s disease in 2016, the band keeps going. In May 2019 they played six shows in Las Vegas and are currently touring the US. Founding member Verdine White, who moved with his brother Maurice to Los Angeles in 1970, still plays bass, percussion and sings in the band.

Rolling Stone magazine has listed 12 of their most important songs, from ’September’ to ‘Boogie Wonderland’. Take a look, listen, and join the party.