Otis Redding The King Of Soul Is Coming To Porvoo 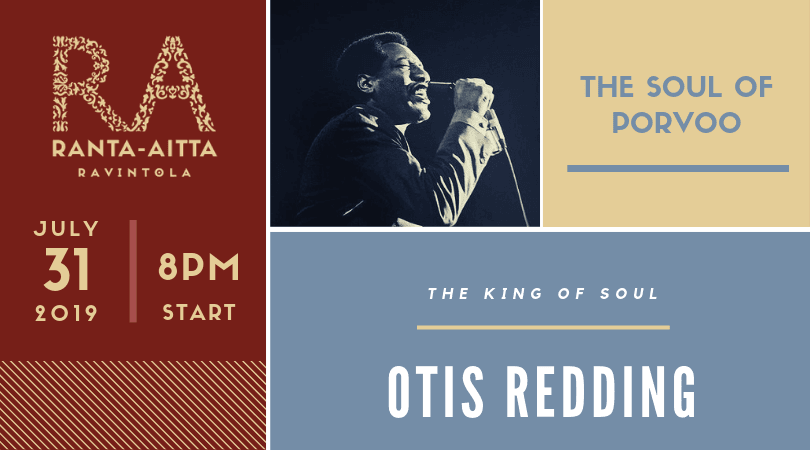 Otis Redding – The King Of Soul

Otis Redding died tragically in a plane crash in 1967. he was just 26 years old. Compared to his few years in the lime light, he has had a massive impact on soul music. So much so, that the legendary Stax/Volt record company almost failed when they lost their biggest star. Because of Redding’s early demise, only a handful of live performances were filmed. Our featured film is a compilation of performances from the Stax/Volt tour of 1966 and Monterey Pop festival in 1967.

Otis Ray Redding Jr. was born in 1941 and grew up in Macon Georgia. Like so many of soul music greats, he started his career singing gospel in his home town church. He was a huge fan of Little Richard and learned to play guitar, piano and drums as well. Young Otis had to quit school at the age of 15 to support his family. His father had contracted tuberculosis and Otis and his sisters had to work to survive.

Between odd jobs Otis played piano at Macon’s Hillview Springs Social Club. As a 17 year old youngster Otis took part in “Teenage Party” talent contest. He sang Little Richard covers with guitarist Johnny Jenkins and together they won the contest for 15 consecutive weeks (this honor was returned 1989 when Little Richard inducted Otis Redding to Rock & Roll Hall of Fame by not giving a speech, but singing his hits). With their new found fame Otis Redding and Johnny Jenkins were recruited to the band Pat T. Cake and The Mighty Panthers and went on tour.

Otis’ next break came when Little Richard quit rock n’ roll to sing gospel. His band The Upsetters hired Otis to replace him. This should have been the dream come true to a true fan, but Otis quit this well paying job almost as soon as it started. But through his new contacts Redding got to know important people in the music business. He recorded his first singles (‘Getting Hip’ and ’Shout Bamalama’ to little notice) and helped his friend Johnny Jenkins in search of a new contract.

Johnny didn’t have a driver’s license so Otis drove him to a try out with Stax record company at their studio in Memphis. The session didn’t go well for Johnny but his driver got to sing too. Studio chief Jim Stewart was well impressed and Otis’ first hit single with Stax ‘These Arms Of Mine’ was released in October 1962.

The start of his career wasn’t easy though. Redding and his band got an important gig playing at New York’s Apollo Theater, with many famous artists, to record a live album for Atlantic Records. Story goes, that even though Otis and his band got payed $400, the sheet music they had to use cost $450. The band had to scrape money where ever they could to play and pay for room and board. When headliner Ben E. King heard of their plight, he gave them $100.

By the mid 1960’s Otis Redding became known for his heart wrenching singing and slow tempo songs. He was dubbed ‘Mr. Pitiful’ by a famous disc jockey. Otis immediately embraced this nickname and made it in to a song. Redding worked tirelessly: between 1965-66 he released four studio albums.

The US music world was still very segregated to “black” and “white” audiences. Redding was the first soul artist to target the white rock and roll crowd: he performed in Los Angeles’ rock mecca Whiskey a Go Go, San Francisco’s Fillmore Auditorium, the Monterey Pop festival (covering The Rolling Stones’ song ‘Satisfaction’) and toured Europe to rave reviews. In 1966 Otis recorded an old Bing Crosby and Frank Sinatra classic ‘Try A Little Tenderness’, even though the song’s publishers tried to stop him. Otis made the song his own and today it’s very hard to imagine anyone else singing it.

Otis Redding always embraced new music. He was an avid fan of Bob Dylan. At the time of his death he was obsessed with The Beatles’ ‘Sgt. Pepper’s Lonely Hearts Club Band’ album (just like the rest of the world). The Rolling Stone magazine writes about Sgt. Pepper’s influence on Otis’ music. He wanted to put more emphasis on his lyrics and try new arrangements. This new direction can be heard on his biggest hit, ‘(Sitting On) Dock Of The Bay’, recorded just days before his death.

Otis Redding was survived by wife Zelma and their three children. And a back catalogue of three posthumous studio albums and several live recordings.

Back to Ranta-Aitta’s front page.