Prince, His Purpleness, Comes To Porvoo 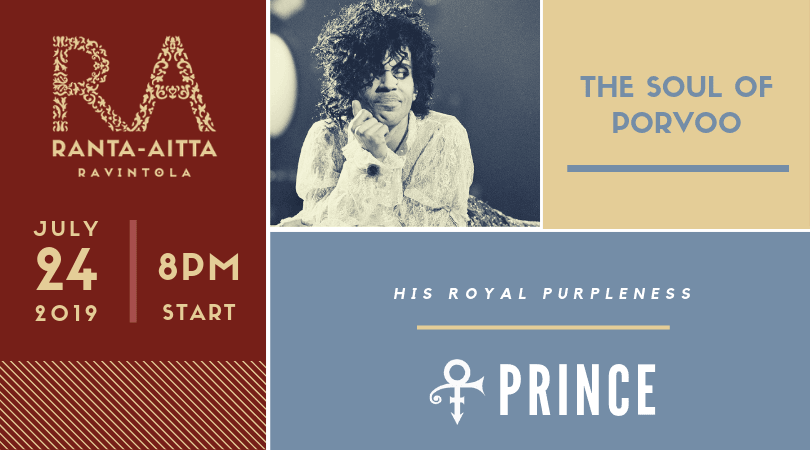 How many people have a colour named after them? Well, Prince has. Pantone colour “Love Symbol #2” was named in his honour. It’s a shade of purple, of course. In the world of music he is much harder to categorise. Prince was the creator of the ‘Minneapolis Sound’, funk rock mixed with synth-pop and new wave, but his own music never stayed within these boundaries. He played rock and deep soul, his voice was both strong baritone and high feminine falsetto. On many of his records Prince played all the instruments himself. He wrote the lyrics and the music, made the arrangements and produced everything from start to finish. When others did what they could, Prince did what he wanted.

Prince Rogers Nelson was born in Minneapolis Minnesota in 1958. Both his parents were musicians and he was named after his father’s stage name; John Nelson’s jazz band was called ‘Prince Rogers Trio’. No wonder young Prince composed his first song at the age of seven. But he had other interests too. Prince played a lot of sports, varsity basketball amongst them, and studied dance theatre. Prince’s parents divorced in 1968 and he had a troubled relationship with both his father and his mother’s new husband. But when his stepfather took him to see James Brown in concert, that was it: Prince was going to become a musician. And later, when his father kicked him out and he had to move in to his neighbours’ basement, he formed a band with their son André Cymone.

From Early Years To Success

Well known from an early age amongst the musicians in Minneapolis, Prince co-wrote songs and played on several recordings. He made his first solo demo aged 19 and first solo album aged 21. Touring with André and other top musicians in his band got Prince ready for his first big hit. ‘I Wanna Be Your Lover’ was released in 1979 and topped the Hot Soul chart. The band kept touring and the hits kept coming. First they supported artists like Rick James and The Rolling Stones on their US tour. Pretty soon they got to be the headliner themselves. In 1982 Prince released his first international success: the double album ’1999’.

Maybe due to his background in dance theatre, Prince had a passion for acting. Those very theatre like shows he put up on stage with his band weren’t enough anymore. Somehow Prince had managed to get a movie deal, despite having no film exposure except for a few music videos. His persistence resulted in the loosely autobiographical movie Purple Rain, released in 1984. The Film’s soundtrack became a massive world wide hit and the title song is probably the most recognised of Prince’s songs.

Prince was a prolific writer and some of his biggest hits were recorded by others: ‘Manic Monday’ by The Bangles, ’Nothing Compares 2 U’ by Sinead O’Connor, ‘I Feel For You’ by Chaka Khan, etc. Prince worked with many women, which wasn’t usual in the music business of 1980’s and 1990’s.
Both of his best known bands, The Revolution and The New Power Generation, included several top female musicians: Wendy & Lisa, Sheila E., Rosie Gaines, etc. Prince didn’t need to go with the flow. He worked with the people he wanted to work with.

This tendency to carve his own path got him in to a serious dispute with his record company in the mid 90’s. They owned huge amounts of Prince’s ready to publish music but didn’t want to ‘saturate the market’ and held back. Prince was furious. The record company owned his name and his back catalogue, but they didn’t own his genius. He changed his name to a symbol (later dubbed “Love Symbol #2”) and started spewing out new music at a breakneck speed to get him out of his contract. By the late 90’s the ‘Artist Formerly Known As Prince’ had been able to change company policies and was ready to use his own name again.

During the 2000’s Prince kept up the tempo with publishing new music and touring. A Prince concert, when he didn’t cancel it, was always a Happening. Sometimes he had an elaborate set design with city streets and basketball courts. Sometimes it was just him with his piano. What ever the concept, Prince ruled the stage. Everything was perfectly timed: the music, the atmosphere, the storyline. His band was always in top form, ready to take part in any sudden movements the maestro came up with. Prince made his audiences dance and cry by playing hit after hit.

In April 2016 Prince cancelled a few shows. Nothing surprising there, he was known for this. Then, suddenly and unexpectedly, he was dead. Prince died at home in Paisley Park. The cause of death was stated as an accidental overdose of fentanyl, a powerful opioid pain medication.

After his death a lot of praise for his work came from a surprising direction. In rock and metal media Prince was remembered as one of the world’s greatest guitarists. A famous story tells that when a journalist asked Eric Clapton: “What’s it like to be the worlds best guitarist?” Clapton answered: “Ask Prince.”

Though this story is almost certainly an urban legend, Clapton has never denied saying it. The story probably originated from Prince’s legendary performance of The Beatles’ song ‘While My Guitar Gently Weeps’, a song witch is most often heard performed by Clapton. A star studded band played this song at composer George Harrison’s posthumous inaugural to the Rock N’ Roll Hall Of Fame. Guitar Player magazine wrote about the impact of Prince’s take over at the end of the song. Watch the video on YouTube and see the awestruck looks on the faces of this most famous cover band.

Back to Ranta-Aitta front page.