Nina Simone, The High Priestess Of Soul, Comes To Porvoo 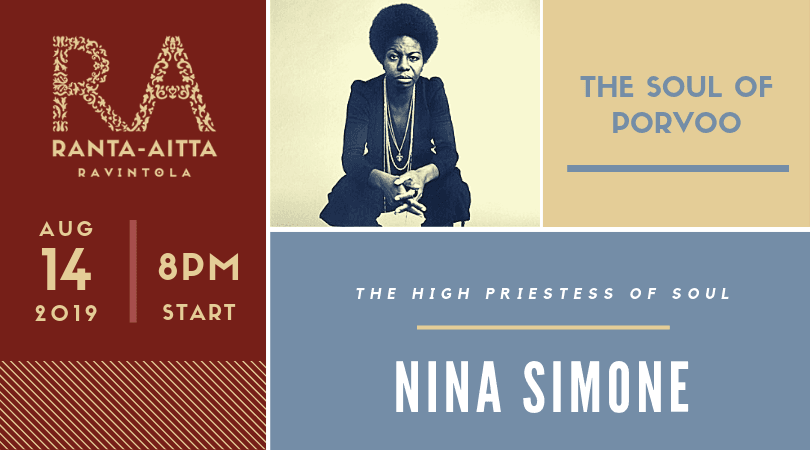 There are at least two sides to every story. And in the case of Nina Simone, there are many more. A unique talent, troubled soul, violent agitator or the greatest musician in the world? These are just some of the labels that come to my mind when writing about Miss Simone. I have to wonder. To what extent was she a product of her times and the place she grew up in? If she lived today, would we have a fiery Nina Simone or would there be a medicalised meek Eunice Waymon (her real name) instead?

To her legacy this speculation is pointless. She was at the same time a well trained piano virtuoso and truly naturally gifted. Because of her training she could infuse counterpoint and other elements of classical music to her songs and performances. Because of her gifts, she could do this in new and unique ways that no-one else dared to try. Watch this version of her biggest hit ‘My Baby Just Cares For Me’ where she effortlessly blends together two (sometimes three?) different melodies. Amazing.

The other side of her story is, that she suffered from an undiagnosed bipolar disorder. The illness probably fed her creativity, but made her life very difficult. It affected her career and the lives of her nearest and dearest.

A Rebel With A Cause

Featured concert films at Ranta-Aitta will be ‘Live at Montreux (1976)’ recorded in Switzerland and ‘Live at Ronnie Scott’s (1984)’ recorded in England. It is no wonder both the films were made in Europe. Nina Simone had a troubled relationship with her native US. Because she had witnessed racial segregation in her home town Tryon, North Carolina, she became an activist in the civil rights movement of the 1960’s. And not the nice and quiet kind of activist, no. Nina Simone was angry and she was’t afraid to say it. In her famous song ‘Mississippi Goddamn’ she dared to swear on record and her performance was full of fury.

Maybe due to this fury she always seemed to play second fiddle to her contemporary Aretha Franklin. She lost Grammy Awards and other nominations to Franklin. Even her original song ‘To Be Young, Gifted And Black’ was a bigger hit sung by Aretha than herself. To anyone else, this might have stung, a lot. But Nina Simone didn’t want to be a jazz or a soul singer. Until the end of her days Miss Simone wanted to be a classical pianist, playing Bach at Carnegie Hall.

From Eunice To Nina

Her musical genius was apparent from a very early age. So much so that even the white people of her home town Tryon set up a fund to send her to school. With this backing she was able to study at the prestigious Juilliard school of performing arts in New York. Then she auditioned at the Curtis Institute of Music in Philadelphia. And didn’t get in. Was it because she was black? Eunice herself thought so. This was a catastrophe. Her family had already relocated to Philadelphia and she had no school and no scholarship. The only way to support her family was to play night gigs in Atlantic City’s bars and clubs.

It wasn’t enough that she played anything she could, pop tunes, classical music, jazz, she had to sing too. To everyone’s amazement she had a deep almost baritone voice that set her apart from others. In order to hide from her preacher mother that she played “devil’s music”, she adopted a stage name: Nina Simone.

For Miss Simone playing jazz, blues and soul was always a temporary job. Something to pay the bills with until she could continue with the classical career. But the temp job got permanent. Suddenly she had many mouths to feed. Not just her manager husband and a daughter but her whole band and crew were dependent of her. Constant touring felt more like a trap than a calling. She needed to burn and political activism became her torch.

Both her musical career and private life were full of beautiful highs and dramatic lows. It seems like Nina Simone lived four different lifespans in her 70 years. Her music has had at least two major revivals. First in 1987 when her version of ‘My Baby Just Cares For Me’ was featured in a Chanel No. 5 commercial. This saved her from illness and obscurity and she was able to tour again. Another posthumous revival has been going on in recent years and is due to one of her most intense performances. Her version of the traditional spiritual song ’Sinnerman’ has been heard in countless recent TV shows and movies: Sherlock, The Blacklist, Lucifer, Person of Interest, just to name a few. Nina Simone’s intensity fits the times again.

In 2015 two separate documentary films were made of Nina Simone. An Oscar nominated Netflix documentary ‘What Happened, Miss Simone?’ and ‘The Amazing Nina Simone’ in which several of her colleagues and friends were interviewed. If you don’t know about her life and her music, and even if you do, do yourself a favour and watch either one of them. I promise: by getting to know her, you’ll enjoy her recorded performances at Ranta-Aitta even more.